Book Review: The Evolution of Civilizations 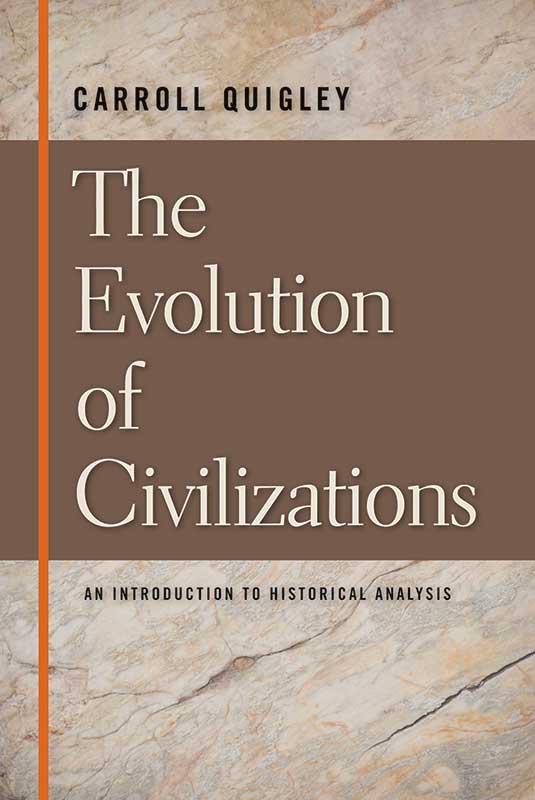 The Evolution of Civilizations was published in 1979, and I wanted to write a review as I consider it one of the best books on politics, society, and “what it all means”.

The book was written by Carroll Quigley and meant to be a textbook for his historical analysis courses. However, to limit it to this purpose would be misguided. It provides a framework for analyzing societies, and discusses the seven stages of a civilization’s development, rise, and decline. As we currently grapple with the challenges and questions around our political situations and the general meaning of Western Liberalism, these frameworks provide a rational and analytical approach to observe the world around us.

If you are interested in the state of the world, Carroll Quigley’s writing is both approachable and extremely enlightening. His analysis of civilizations looks across six themes: intellectual, religious, social, economic, political, and military. More importantly, he discusses the importance of using such themes to build a systematic approach to analyzing historical facts. Whether you have six elements, three, or fifty, does not matter; the key is to build an understanding of relationships between historical events that builds a narrative and a broader understanding of how the world works.

That’s not to say that Quigley avoid sharing his own views on the development of societies and civilizations. His research and narratives lead to a theory of civilizational development; a grand view into how human civilizations rise and fall over the course of the centuries or millennia during which they exist. As a result, Quigley’s writing has a few important takeaways for readers today:

In addition to the frameworks and historical discussion above, The Evolution of Civilizations was eye-opening it that it underscores that there is no such thing as a permanent civilization.

Early civilizations were the result of a million years of evolution and climate cycles that led to the development of basic hunting and farming cultures. Later civilizations developed from the remnants of these earlier ones by subsuming some of their technologies, beliefs, governance structures, and so on. What is important to emphasize is that while civilizations rarely experience apocalyptic events, there are also clear boundaries between civilizations. For example, once Classical Civilization began to wane in the first millennium, it took five or six centuries for Western Civilization to begin making progress and develop its own systems (hence the Dark Ages, as some would call this period). This serves as a stark reminder that while civilizations evolve and make progress, it’s important to note that progress can be fickle, and decades of consistent economic growth (as we see in today’s global environment) are fairly unique, special, and should not be taken for granted.

In summary, Quigley’s “The Evolution of Civilizations” is a fantastic, in-depth look at one of the highest levels of humanity – the development of not just groups, cities, or societies, but entire civilizations. Quigley does not provide answers, but rather the analytical tools to enable the reader to come up with his or her own. This humility is refreshing, and I personally really appreciate it. This is a fantastic read if you want to get more rigorous and analytical in your own thinking about the state of the world today.